How to Use a Searing Burner on a Gas Grill

A searing burner on a gas grill allows you to sear your meat. Searing meat makes it crispy on the outside by juicy on the inside. When it comes to making steaks and other meats medium-rare or rare, searing burners on gas grills are essential. While every searing burner is different, there are some common steps that you can follow to use a searing burner properly. To help you, we’re going to show you everything you need to know about searing gas grills and provide you with the steps needed to use one effectively.

Read on to learn more. What Is a Searing Burner?

Searing burners are used to sear meat on one or two sides. Searing meat cooks it rapidly because of high temperatures, which produces a medium-rare or rare cook to the meat that’s cooked for 5-8 minutes.

The abundance of small flames generates the initial heat, while the ceramic material reaches temperatures hot enough to release infrared light. For this reason, many infrared grills come with searing options and searing burners.

These burners typically come on premium grills and use a combination of many small flames and ceramic plating.

What Does Searing Do for Meat?

Searing meat is essential for flavor, juiciness, and even crunchiness.

When the meat has seared the proteins in the meat are browned and the natural sugars are caramelized. Once this occurs, the meat develops a thick layer of crust on one or both sides of the meat. The layer adds flavor with every bite and makes it easier to cook meats to medium or medium-rare temperatures.

While searing burners are efficient, it’s important to learn about how to use them properly for the best results.

Read also: How to Clean a Flat Top Grill A searing burner gets easier to use each time you cook with it. That said, it’s important to follow the appropriate steps to master good cooking habits. While some of these steps are more work than others, cooking correctly is important when working with searing burners for a good outcome and proper safety.

Step 1: Ingredients, Tools, and Your Grill

First and foremost, you need to make sure you have everything you need to start using your searing burners. This includes the tools you need, ingredients you’ll use for cooking, and the items you’ll be cooking.

As a quick checklist, here are things we recommend having before using a searing burner on a gas grill:

Most grills need to be started and preheated –almost like an oven. This also applies to grills that have a searing station. So, open the lid, turn on the heat source and light the primary burners.

Once everything is turned on and you see the flames, close the lid of your gas grill for 15-20 minutes. During this period the grill will preheat. For most grills, you’ll want to keep an eye on the temperature gauge and monitor it until it reaches between 500° Fahrenheit and 550° Fahrenheit.

While the grill is preheating, you should also tend to the meat you’re going to cook. If you’re cooking a steak, make sure you bring it to room temperature to avoid longer cooking times and uneven searing.

We also recommend patting the meat down and seasoning it before placing it on the grill.

Step 3: Turn on the Searing Station and Prepping It

If you’re using the searing station you need to turn it on and prepare it for cooking. Cooking different things requires different prep, so for our article, we’ll focus on searing a steak because it’s one of the most common food items to sear on a gas grill.

First and foremost, you want to lather oil on the searing station’s grates. Oiling the grates will prevent the meat from sticking and prevent seasonings from coming off the meat.

You’ll also want to make the searing station has been operating for a few minutes to ensure it’s at the right temperature; the last thing you want is an uneven cook.

We also recommend cleaning the searing grates before and after each use to prevent sticking and other issues from occurring.

Step 4 is all about the searing process. For this part of our step-by-step guide, we’ll use steak as a reference again. That said, much of what’s written here applies to fish and other types of meat.

When it comes to searing you don’t want to cook the meat for too long. Instead, monitor the meat and sear it for 2-4 minutes on each side.

This ensures that you don’t burn the meat. You can also sear the corners and edges to help the meat cook all the way through.

When you’re finishing up there are a few things to do. First and foremost, we recommend moving whatever was seared to the regular burners to complete the cooking process.

While searing adds flavor, it’s not the best method for cooking meat all the way through. Once your meal is finished you should turn the grill off, turn the searing station off, and clean up the grill.

For cleaning a grill, we recommend a solid grill brush and grill cleaners.

Searing burners have higher flames and burn hotter than regular grill burners. Because of this, you need to practice safety precautions when cooking with searing gas burners. The good news is that safety is simple as long as you follow a few simple tips.

Leaving a searing burner on a gas grill unattended has disastrous consequences. If the searing burner gets too hot it can cause mild burns and other injuries. You should also keep children away from the grill if you’re not close to it because they can hurt themselves.

If your gas grill has a lid, don’t close it when you’re using the searing burner. The searing burner generates a lot of heat and smoke, so closing the lid creates a buildup of this heat and smoke. While this can cause the meat to overcook all over the grill, it can also lead to seared eyebrows and other burn-related injuries.

Always Use a Clean Gas Grill

The last safety tip we have for you is to use a clean gas grill and clean grill tools. Using dirty grates can lead to uneven cooks, charred meat, and food illnesses. Moreover, using unclean grill tools can make messes worse and cause bacteria to build up on food items.

When using the searing burner on a gas grill, make sure safety is a top priority.

Searing meat and other foods can add flavor that you don’t get when cooking them the traditional way. For this reason, learning to use your searing burner on your gas grill can help you take your meals to the next level. It will be easier to cook things like steak, fish, vegetables, and even vegan food options.

If you follow the steps provided above you’ll be able to get the most out of your Gas grill searing Burner without the risk of hurting yourself. Remember, searing burners are hotter than the average burner, so make sure you practice the proper safety precautions.

Get Cooking With the Best Infrared Grill 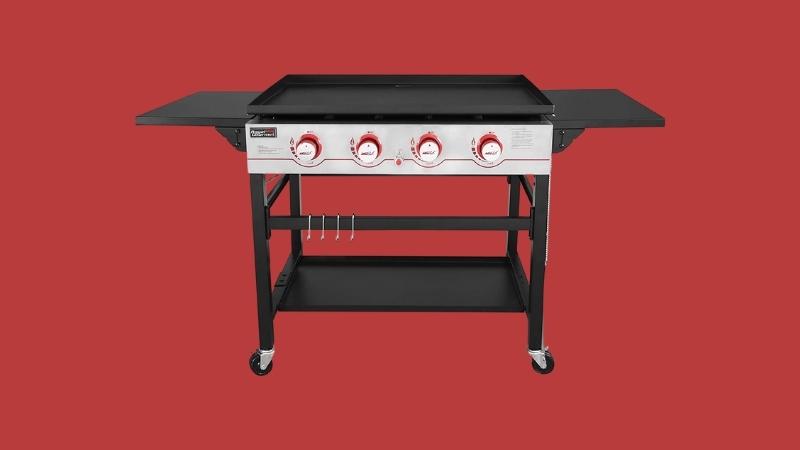 How to Clean a Flat Top Grill

Our guide will take you through exactly how to clean a flat top grill, what you need to do the job, and how to ensure it stays clean.